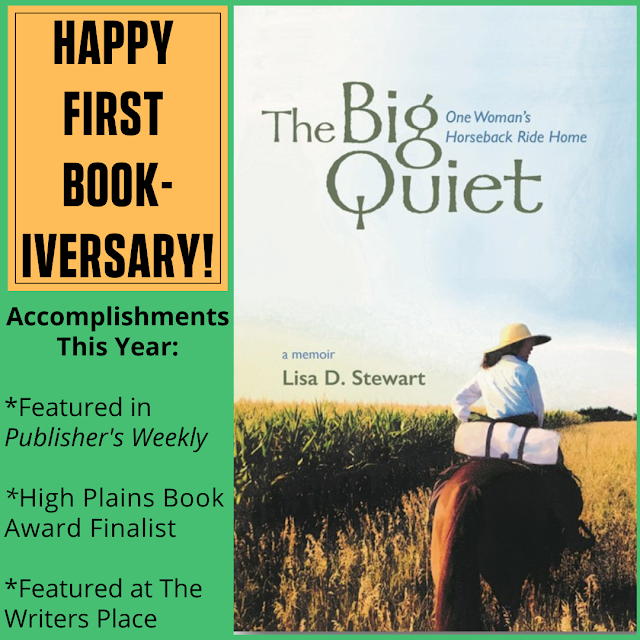 Congratulations on such a stellar year, Lisa Stewart!

If you've read the book, what's your favorite part?
If you haven't (yet) read The Big Quiet, here's a taste of what you've missed so far, to appetize you for more!

Vision on the Plains

When I began my trip, the days were dry and temperatures in the eighties and nineties. Today, June first, I was on the verge of chills in three layers plus a windbreaker. I had curled in a ball last night against the cold in Nathalene’s yard. Each time I twisted inside my foil blanket, I found myself smiling. I’m going home. Last night’s cold would be swept away today by dry breezes, under skies the color of blue sailors (chicory blooms) lining the roadside.

Now I proceeded again on the slippery pavement from Nathalene’s. The verbal directions she had given me the night before included descriptions of houses, hills, fence posts, and not the name of a single road. Her words evaporated with my first wrong turn. We stopped often to check our maps, and Chief ate ravenously each time, which freed my hands from holding him. By the second hour, the road names finally matched our map. We arrived on a sixty-mile-per-hour, two-lane county route with sharp ditches, heading north from Lawrence County. I gave Chief his head on the pavement to gait as fast as he could to get us to patches of gravel, miles ahead.

When I finally arrived at my planned dirt road, I could breathe. Open fields surrounded us, and we followed miles of sandy chat. I stopped two times to ask for water, but no one was home. On a rise before us was a neat, white farmhouse surrounded by hayfields and wheat stubble whose borders were groomed like a golf course. The house had no shrubs around it and only a few fruit trees to block the wind. Imagine my joy when, in the distance, I saw a car pull into the drive. It took fifteen minutes to get there, and just as we neared, a ten-year-old pickup pulled into the drive as well. A man in his seventies stepped out. Look how handsome he is, Chief.

He was slender, quick, serious. I gave my windmill wave. He was in a hurry. I have a bucket, I told him. Of course, we could use the hydrant near his small, white-painted well house. This land was his, but he did not stay to tell me about it, because it was noon, and his wife was waiting inside with his dinner—the largest meal of the day, always served at noon.

After stowing my bucket, I led Chief back to the road and its mowed, grassy right of way to let him graze as long as he liked. Imagine a chicory bloom as a parasol—that was our sky. Chicory grows wild and tough in ditches in the Midwest this time of year. The sunflower-styled florets create a lavender/blue haze against the grass. Its roots can be dried and ground to season coffee, to make insulin, and the leaves can be eaten like endive.

It was at that moment, grazing my horse on the top of the world, I had a vision: I saw blackness, like a moonless night, miles away from the nearest yard light. I saw a thin, bright outline of the United States’ map. Within the map were millions of specks of light. Each was a home. People. Here and there, were small areas without light, voids, as if waiting to be lit, easily avoided, easily illumined.

In my vision, I saw the United States of America arrayed with stars—generators of goodwill. Points of kindness in the form of people. My people. In my country.