April 1, 2022 - Meadowlark Poetry Press is over the moon to announce the upcoming release of Songs for Ghosts! This is California poet Julie Valin’s first Meadowlark book and second poetry collection, following The Distance Between (Six Ft. Swells Press 2011).

Nothing dies for good in this poetry collection. In plainspoken and free verse rock ‘n’ roll style, Valin celebrates the moments that make and break us, the travels that invigorate us, the people who mean the world to us, and the feelings attached to the ceaseless entrance and exit of these moments. Memories intertwined with songs is a motif, and, with a soundtrack (linked to Spotify) included in the back, the book reads as if it's an invitation to hang out with the poet, listening to her handmade mixtape.

About the Book Launch Event

Julie and Bill will be celebrating their new book releases with poems, stories, songs, drink and all-around merriment.

Doors will open at 6 p.m. for dinner and drinks, so arrive early! Show will start promptly at 7 p.m.

Learn more about the event here...

JULIE VALIN turns songs into poems, since she is perpetually influenced by music, and she was too shy to be in a rock ‘n’ roll band. Her poems have appeared in The Gasconade Review, The Black Shamrock, The Poeming Pigeon, Chiron Review, Red Fez, and more, plus several anthologies & collections, including the Punk Rock Chapbook Series by Epic Rites Press. She is a book designer for her own business, Self to Shelf Publishing Services; she works at her community library; and she is also a co-founder of Six Ft. Swells Press. She loves piling books artistically on her nightstand and running through the woods knowing nothing is really chasing her. She lives in Northern California with her husband and daughter. 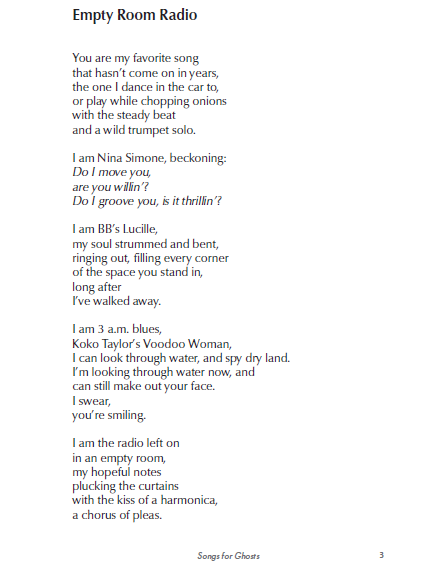 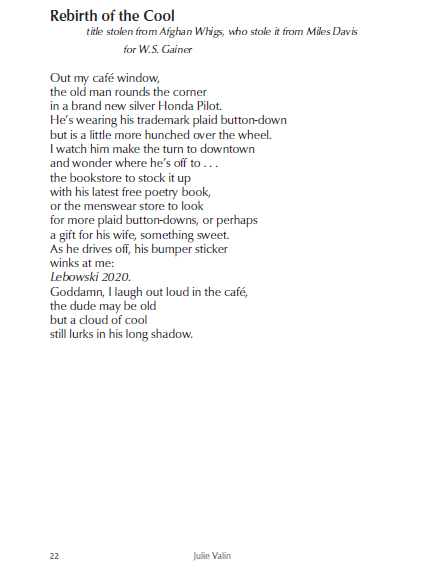 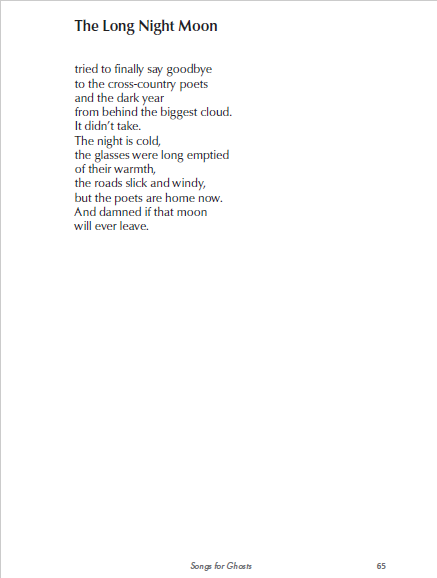 What Readers Are Saying

Julie Valin’s poems in Songs for Ghosts are that crackle and pop of the needle hitting the record, the first sliver of moonshine through the window, the thump in the chest when love calls, the sound of a radio on in an empty room, and the songs you choose to play when ghosts appear. There is a deep rhythm to these poems. They are that 1980s first synthesizer kiss, the alternative circa 1991 combat boot kick in the heart, the razor wire of punk that leaves scars to be proud of, and they soothe and sin like the blues.
–Todd Cirillo, Kisses From a Straight Razor, Six Ft. Swells Press Publisher

Julie Valin is a poet of barrooms and jukeboxes, buttercups and bird ghosts, snapshots and lazy angels. In her collection, Songs for Ghosts, she takes her reader on a vivid ride, filled with music and sunlight, nostalgia and hope. She tells the reader, “All the poets have already said it the right way,” but that doesn’t stop Valin from saying it her way. The poems offer the reader a dynamic, honest, melodic adventure, in a world where she lets us know from the beginning, “I am the radio left on in an empty room.” Valin’s affection for the connection between music and memory are an ongoing theme, playing throughout her poems. It’s as if the reader is sitting beside her when she writes, “...I go back to the Blues, / sip my coffee / with a splash of bourbon, / watch the record spin behind the glass, / and listen to poets sing / 80-year-old words / to fill me up / once again.” This is an invitation to pull up a barstool and pore over the dazzling Songs for Ghosts.
–Kirsten Casey, Ex Vivo: Out of the Living Body, Poet Laureate of Nevada County, CA

I don’t know what that thing is . . . that thing that makes a poem great, but whatever it is, Julie Valin has got it.  She writes of ghosts, record players, and the romance of cheap beers—of things lost and the sensuality of everyday moments—every word a frayed yet somehow perfect translation of the endless longings of the heart. Like an old master blues picker, she plays the truth in every note, and lifts our spirits to the moon.
–Shawn Odyssey, Edgar and Agatha Nominated author of The Oona Crate Mystery series

The poetry of Julie Valin’s Songs for Ghosts is immediately accessible and engaging, alive with music and precise imagery. These poems are full of the stuff of life; the big passions as well as the quiet moments that reveal our common humanity. Simultaneously playful and full of hard-won insight, this collection maps the human condition with the truth and humor of Valin’s unique voice.
–William Taylor Jr., Pretty Things to Say

Julie Valin’s poetry is a delight: amusing, heartfelt, thought-provoking. Valin infuses many of her poems with her love of music; readers feel as though they are with her, driving down the road, crooning along to the radio. In Playin’ the Storm Out, she writes, “My own blues, / my own flat notes and rises: / a song in the windchimes, / the sad and hopeful harmonica / of my memory / never taken out and played.” In this collection, Valin captures that sense of ineffable longing most of us have felt at some time, though have not been able to give voice to. For all of what life encompasses, read Songs for Ghosts.
–Judie Rae, The Weight of Roses and Howling Down the Moon