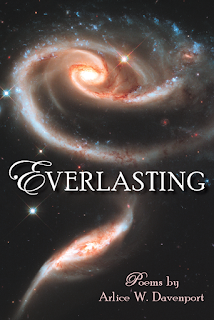 All of us at Meadowlark hope you are enjoying National Poetry Month!

Adding to the festivities, Meadowlark poet Arlice Davenport, author of Everlasting and Setting the Waves on Fire, was interviewed by Meadowlark publicist Linzi Garcia. Learn about the poet and his poetry !

How is Everlasting similar to and different from Setting the Waves on Fire? Everlasting resembles Setting the Waves on Fire in two primary ways: They each rely on the philosophical concept of Being, the first principle or power of all that is. They also rely heavily on imagery from the natural world. I think that imagery is one of the most important poetic devices, after metaphor, which I’ll talk more about later. The natural world offers us the most recognizable and resonant images, although there are other significant sources of poetic imagery—natural and artificial. I like to butt up against what I consider to be the ultimate force of all that exists—Being—and then convey its importance through the natural image.

Has your writing changed? If so, how? By all means. One of my personal goals is to not become too predictable. So I have shied away (for the most part) from long narrative poems about, say, European destinations, one of my mainstays of inspiration. I now want to achieve a more immediate, Zen-like effect that manifests or shines through my poems, guided by two major devices: metaphor as this is that, and mysticism as like attracts/becomes like. I think that a case can be made that both principles aim at the same thing: unity of identity. Metaphor doesn’t say that this is like that; there, we are in the territory of simile. Rather, metaphor identifies/unites two disparate objects (of thought or feeling, et al.). They are the same. Likewise, the mystic’s like becomes like indicates a process of unity, oneness, and the intertwining of essences. But that’s probably enough philosophy for now.

How would you describe the curating, editing, and publishing process for Everlasting? That’s an easy answer: I initially did it myself. I had a different manuscript in hand when I realized that it was not achieving my goal of associative insight: meaning conveyed through metaphor and image. So I scrapped it, keeping only a few poems, and added all new poems, which I then curated and edited myself. I sent the new manuscript to Tracy Simmons, publisher of Meadowlark Press, as an offering for the debut of Meadowlark's Poetry Press. She accepted, then I fairly quickly reworked that manuscript, jettisoning more narratives and funneling in more newly written, shorter poems. With her indulgence—and that of her assistant and publicist, Linzi Garcia—we made it work. Of course, during the proofing process, I had many other eyes than mine peering at the poems and pages. I would not have had a completed book without them. 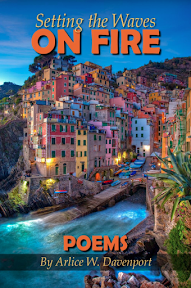 How did the publications of Setting the Waves on Fire and Everlasting affect your literary life? When Waves was launched in October 2020, I felt for the first time wholly validated as a poet. I have had several poems published in different journals, newspapers (yes, newspapers), and online venues. But there is nothing like holding your first book of poems in your hands to say, “You are indeed a published poet,” which, of course, had been one of my life goals. Everlasting can do one thing well in the wake of this initial delight: show that I have grown and improved as a poet. I could say that in some ways, I like the new book better than Waves, but that is disingenuous. I would simply wish for readers to say, “Hey, this, too, is good.” That would be enough reward.

What do you enjoy about publishing with Meadowlark? One term sums it up: creative collaboration. With Meadowlark, you quickly come to understand that making and publishing a book is on par with making a movie. It takes a tribe to create a satisfying, final product. That collaboration only adds energy to a book, which comes alive when it attracts several points of view. You can’t match that feeling when you are toiling alone on your laptop in the wee hours.

What's your favorite part of the publishing process? Hearing Tracy say, “Yes.” After that, it’s the proofing stage, which is still editing at its best.

Tell me about the section organization and titles in Everlasting. I wanted the four books (or sections) to be linked, but also to be able to stand on their own. I like the sense of books within a book. Whether that approach succeeds is up to the reader. The first book is self-declared mysticism; the last, a resurrection of Europe. Do they mesh? Again, the reader decides. Authorial intent takes a back seat to reader appropriation of and reaction to a given work.

Which are your favorite poems in this collection? Why? I always find it hard to pick out a handful of favorites, not because all poems are equally good, but because on re-reading them, I see elements that strike me as valuable. In general, I like desert images, because historically they have been the habitation of early mystics, and because their openness and apparent barrenness give birth to existential or spiritual possibilities. But I also like my love poems—“Berries” and “Heritage,” especially—and poems about the fecundity of nature and the human person, and, of course, poems about Europe.

What inspired you to use this cover image? I knew from the outset what I wanted to title the book, to suggest that art is more than ephemeral. I searched for a natural image that would express the theme of “everlasting,” and what could be more expansive and permanent than the universe?

Regarding the writers, musicians, philosophers, and visual artists in this collection, how have some of these creators individually and/or collectively inspired you? That answer, too, can be summed up in one word: excellence. All the names I mention represent a debt of gratitude for the artistic prowess that each person displays in his or her work. The best way to learn to write well is to read well, that is, to read great writers. I imagine that the same principle applies to other artistic endeavors. When I read Cavafy or Dante, when I listen to Schubert’s string quintet in C major, when I think about Plato or Teresa of Ávila, when I marvel at Rothko, Valazquez, Van Gogh, their exceptionalism, their foundationalism, their “language” of the spirit—whatever the medium—all this is unforgettable, formative, of a depth that I can only hope to aspire to. I could praise them and so many others all day long. But then, when would I have time to write?

What did you enjoy most about the book launch event? I want my book launches to be a joyous and fun occasion. Having so many readers articulate my poems aloud creates a chorus of voices that can only invigorate all who hear it. [Watch it here…]

What do you hope to achieve with this book? I would love for readers to feel drawn to a type of mysticism that can nurture them and change their vision of the world. Rilke wrote in “Archaic Torso of Apollo,” You must change your life. If my poems can even approach this type of profundity, I would be satisfied.

Tell me about your hopes/plans for the next collection! Well, I don’t want to jinx things, but I would like to publish one more book (after that I would take a breather) that goes even deeper than Everlasting. Exactly what that means and what shape that would take are not unknown to me, but I don’t want to count on any initial ideas. After all, I threw out the original manuscript I had for the second book. I could easily do the same for the third. In any case, I would love to have a hat trick of Meadowlark books. (Stay tuned!)

Order Everlasting and Setting the Waves on Fire Here!