We lost a very special member of the Meadowlark team this morning. Edna was a role model in more ways than one. A skilled storyteller, an extraordinary spirit. (updated 1/23/2021 - funeral service details at the end)

Updated 2/4/2021 - a fundraiser has been started to help cover Edna's funeral expenses. If funds are collected beyond what it will take to cover the funeral expenses, a scholarship or other fund to benefit young writers could be established. 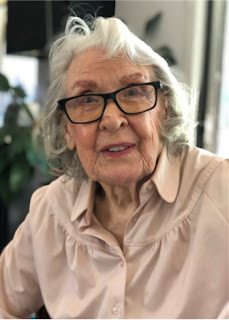 Edna Bell-Pearson passed peacefully this morning, at the age of 100 and 44 days, her niece Marna Raymond and nephew Jim Ungerer at her side. She had been residing in an independent living apartment in Louisburg, Kansas. Edna was married to Carl Ungerer from 1945 to 1959. She reunited with the Ungerer family in recent years, upon publication of her memoir, Headwinds, which details the four years after World War II when she was married to Carl Ungerer, with whom she helped build the first airport in Marysville, Kansas.

Edna Bell was born to Elizabeth Evangeline (Bessie) Booth and Fred Hunter Pearson. Edna was the oldest of four children, three younger brothers who predeceased her.

Her website lists her careers “other than writing” as everything from babysitting, housekeeping, and dog walking, beginning as a teenager, to being a co-operator of the first airport in Marysville, Kansas, as detailed in her 2020 Kansas Notable Book, Headwinds, a farmer/rancher, real estate promoter, radio and TV news reporter and more. Edna’s talents were broad and varied, and her skill at writing stories that captivated readers was surpassed by few. 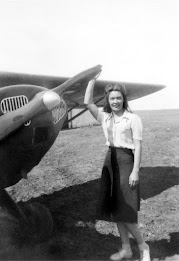 As well as hundreds of published stories, articles, essays, and poems, Edna was most noted for her first book, Fragile Hopes, Transient Dreams and Other Stories, a southwest Kansas saga which was chosen during the Kansas sesquicentennial year as one of the “150 Best Kansas Books.” In 2020, Headwinds, a Memoir (Meadowlark), was selected as a Kansas Notable Book. Edna was a regular contributor to Kansas! Magazine and Grit Magazine for more than a decade. She wrote flying columns for the Marysville Advocate and Marshall County News in the late 1940s, and a weekly business column for the Dodge City Daily Globe in the 1980s. Her work as stringer, reporter, feature writer, and editor appeared in the Jonesboro Sun (Arkansas), Kansas City Star, Spokane Chronicle/Spokesman Review, St. Louis Post Dispatch, and others.

In Edna’s own words: “I don’t profess to be a great writer, but a dedicated scriber/scribbler, and considering the quality/quantity of work I’ve put out over the years, I think I’m safe in signing myself off as a bona fide writer/author. 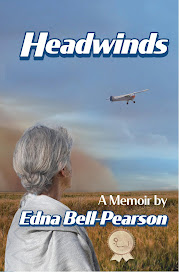 “A question often asked is how or when or why I became a writer. I didn’t ‘become’ a writer; I was born a writer. I don’t remember when I wasn’t writing. I don’t know where my writing genes came from. To my knowledge, no other member of my family, immediate or in the distant past, has shown the slightest interest in putting pen to paper. I’ve been told that, from the time my chubby hands could negotiate a pencil, my favorite pastime was sitting with pencil and paper, deeply engrossed in scribbling. I wrote my first poem when I was five, a silly, poorly composed, rhymed thing which I still have, forever preserved, in my grandmother’s commonplace book.

“For the most part, I lived with my grandparents until I was eleven. Grandma was a great teacher; she instilled in me a love for the Bible (Grandma was very religious) and a love of reading. She loved poetry and, though she never wrote any herself, I think she hoped I’d turn out to be a poet. When I was born, Grandma and Granddaddy bought me a “Birth” day present—The Books of Knowledge.  I still have the complete set—well worn—in the original case. As a child, I spent hours daily, lying on the floor in the living room, one or more of the books open before me. I virtually devoured the stories and poems, but I also spent a lot of time on astronomy, French, and geography.

“Grandma and The Books of Knowledge must have educated me well, because I skipped both the second and the fourth grades. However, I evidently used all my stored knowledge in my earlier years because once I became a fifth grader—although I still got lots of A’s—I was just an average student.”

Edna never did stop writing and had a work in progress, entitled A Tribute To A Man Folks Didn't Like Very Much. Edna also had plans for five additional books about her life, with the working titles of In the Beginning; Living off the Land; Highways and Byways; Friends and Lovers; and Old Like Me. 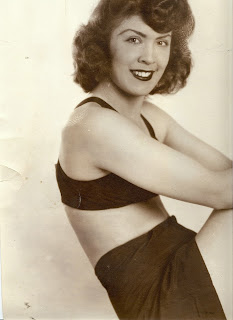