This week's excerpt, in recognition of Holocaust Remembrance Day, comes from Jerilynn Jones Henrikson's YA novel, A Time for Tears. 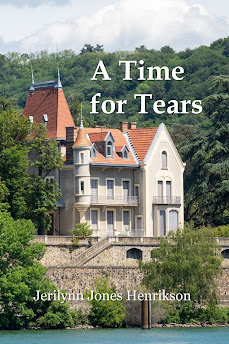 World War II contains millions of stories, for it affected millions of lives. A Time for Tears examines three. André Jabot, a teenage French aristocrat, is enraged by the killing of his young brother as the Nazis blitz the nearby village of Soissons. He swears vengeance and finds his way to England to join De Gaulle and the Resistance. Daniel Hagelman, a young Jewish grocer from Kansas, cannot turn his back on the horror of Hitler’s Nazis and travels to England to volunteer in the Royal Air Force, leaving behind a wife and newborn baby girl. Fifteen-year-old Rachel Ropfogel’s parents, upper class Parisian Jews, see the oncoming disaster as France falls to the Nazis. They arrange sanctuary for their daughter in the remote village of Le Chambon-sur-Lignon where she assumes a new identity, Simon Bouret, a twenty-year-old art teacher. Each of these characters become members of the French Resistance and find themselves pursued by the relentless SS officer, Fredrik Haught. Murder, torture, chaos, orphaned children, caged babies, starving captives: cyanide tablets become a reasonable alternative. In war, many die, some survive. War ends, but only if survivors remember and teach future generations what they have learned, only if they remember A Time for Tears.

That afternoon, as Simone prepared to burn the British agent’s clothing, she noticed a small wallet in the breast pocket of his jacket. When she opened it, she discovered a worn photograph of a little girl about the same age as Marie. She wore a crisp summer dress. The photo caught her sitting quietly, looking away from the photographer into the distance. The similarity of the child to Marie was, in fact, remarkable. She seemed to radiate the same happy disposition. They could have been sisters. On the back of the photo was written in neat script, Maggie Daniella Hagelman, age 3 1/2 years, and taped there was a wispy curl of fine brown hair.

The Yank, as he became known to the household, was unconscious for three days. Doctor Mason came every day after his office hours, under the guise of buying bread for dinner in case anyone became suspicious. He found Simone to be a dependable nurse, following his instructions efficiently: wounds cleaned and dressed, IV saline and glucose drips administered twice daily, bedding and patient clean and tidy. As she tended him, she talked to him as if he were an old friend. “I found your photo of Maggie in your pocket. I hope you don’t mind that I went through your clothes before burning them. Your little girl is so precious. I have a daughter, too, born the same year. In fact, they look so alike, almost twin sisters. Her name is Marie, Marie and Maggie. I would hope someday they could meet and grow to be friends. It must be so painful to be gone from her to this war. I feel this pain of separation as well. When you wake up, we will have long talks about missing those we love.”
Later that morning as she was tucking in the bedcovers, she saw his left foot move a little. “Sir, Sir, can you hear me?” [...]
“Where am I?” he rasped. “Who are you? What has happened?”
“The doctor ordered this shot if you awakened. It is to control pain, but it will also help you rest. He says the next time you wake, you will be more alert, and the pain should lessen as you heal. I will answer all your questions tomorrow. And I will ask a few of my own.”

The Yank wakened just before noon the day after being given the sedative. The tall girl was there. He remembered her from the day before; tall and slim, curly shoulder-length, dark hair, large expressive brown eyes.
“Tell me your name,” he whispered. His throat was dry and sore.
“I am Simone Bouret,” she answered. “I teach art to children in the school here.”
“Where is here?”
“You are in Le Chambon-sur-Lignon, brought here by two fighters in la Résistance. There was an ambush of German troops north of the village several miles. The men who brought you said you are American.”
“Right, American. Joined the British RAF to fight with the allies in ’39—got tired of waiting for America to do something. With SOE, Churchill’s commando force. Hurts to talk. My boots—where are my boots?”
“Under your bed. I cleaned them. I burned your clothes. The bullet holes would have given you away. I also found a wallet with a child’s photo. It is here on the bedside table.”
Daniel turned to look. As he took in his daughter’s image, tears filled his eyes. Wiping away the tears, he turned to Simone. After a moment he said, “Now fill me
in, please.”
“Yes, of course,” Simone responded. [...] “You must be patient and do as you are told to make a full
recovery. Now, do you think you could drink a little broth and some water?”
He answered with a nod. “More sleep, too. And a bedpan. And my name is Daniel.”
“Yes, I know,” Simone responded. “Your friend André told me about you.”
After waking later that same afternoon, Daniel sat on the edge of his bed and dangled his legs for a few minutes. Then with the help of Simone and Louis the handyman and a pair of crutches, he was able to stand and hobble around the room. In a week he could walk up and down the upstairs hallway, being careful always to bend his right knee so that his toes just brushed the floor. With the help of Louis he could use the bathroom at the end of the hall, shave, and wash himself. The staircase was of course an obstacle so, for the present, he remained upstairs. It was imperative that he stay within easy escape to the hidden room in the event of a Nazi search party.
One morning when Simone brought his breakfast, Daniel asked her to fetch a second cup so they could share the carafe of coffee on his tray. He also offered to share his chocolate brioche. “This is a bribe,” he confessed. “I want to know more about you, where you come from, your family, why your English is better than mine.”
“No need for bribery,” Simone said with a smile. “I am from Paris. My parents sent me here to be safe from the Nazis. My English is good because my mother is American. My father’s family have been bankers in Paris for four generations. We are Jews, and Simone Bouret is not my real name but, for now, that is who I have become. My mother is an artist and I share this passion with her. I teach art to the children of the primary school here in Le Chambon. There is more, but let’s save the rest for another conversation—a chance for me to steal another brioche!”
“Thank you for sharing your story, Simone. My family came from Germany to America two generations ago, fleeing oppression. I am a Jew as well.”
[...]
He could not help imagining her to be his own little Maggie. [H]e would close his eyes and picture himself in the cozy apartment above the store on Wabash Street in Topeka, Kansas, USA. Often a tear or two would slide down his cheek as he regretted the time he was losing with his own little girl. “Holy God,” he would think, “I pray the suffering and sacrifices of all those wounded and dying in opposition to this evil will not have been in vain.”

Email ThisBlogThis!Share to TwitterShare to FacebookShare to Pinterest
Labels: A Time for Tears, Jerilynn Jones Henrikson