An Excerpt for Celebrating a Happy Book Anniversary

November marks the 5 year anniversary of To Leave a Shadow, the first of the Pete Stone novels by Michael D. Graves. Join us in celebrating by giving the gift of Pete Stone this holiday season. 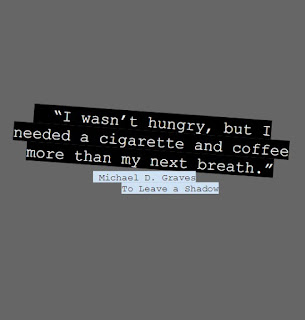 I was awakened in the morning by clanging bars and voices clamoring for breakfast. I was stiff and sore. I wasn’t hungry, but I needed a cigarette and coffee more than my next breath. I didn’t have either, so I sat up and kept breathing. I heard footsteps followed by a voice. The voice belonged to Lieutenant McCormick. The bars slid back, and he came into the cell and stood over me.

“That makes sense. I feel like hell. It’s a package.”

A deputy was with Mac, standing a few paces behind him. I sat up on the cot.

“Well, you’ve really screwed yourself this time, Stone,” Mac said. “What the hell were you thinking? You’ve pissed off some pretty important people. You’ll probably lose your license, and you may do some time.”

“Aren’t you the bearer of good news?” I said. “Have you got a cigarette?”

He did, and he gave me one. I inhaled deeply.

“Anything else?” I said.

“Yeah, somebody named Veatch wants you put away. He’s some big hotshot at Stearman Aircraft.”

“Well, that would explain why he hates you, I guess. You need to work on your manners, Stone. What’s up with you? Why did you break into one of their offices? I’ve got a night watchman who claims he caught you red-handed. Veatch claims you were stealing top secret plans. Veatch says you’re a threat to the security of the United States of America. I think I agree with him. I know you’re a threat to Wichita. This has something to do with that Hamilton suicide, doesn’t it?”

“I’m on to something, Mac. I don’t know what yet, but I’m on to something. I followed one of Stearman’s engineers to that office, a guy who works for Veatch. The guy also happened to be Hamilton’s best friend.”

“So you followed a guy? So what? Why does that give you the right to commit B&E? You’re acting like a rookie, Stone. You ever hear of getting a warrant?”

“A judge wouldn’t have given me a warrant. I have no evidence. I’m working on a hunch.”

Mac shook his head in disgust.

“You and your hunches,” he said. “Well, you’ll have a chance to explain it to the judge. Veatch is pressing charges. He wants your ass in a sling. I think he’s got it, too. You’d better get a lawyer.”

“And in the meantime?”

“In the meantime,” Mac said, “you’ll post bond and be free to go, but don’t leave town. Get a lawyer, stay close, and watch your step. If you screw up again before your trial, you’ll be back in the slammer.”

“You’re damn right you owe me. You can pay me back at Christmas.”

I nodded. Christmas would be coming in the spring this year. I left the police station and stood on the steps outside. I breathed in a lungful of clean air. I walked down the steps to the sidewalk shaking the stiffness out of my bones.

Fortunately, I was only a few blocks from where I’d parked my car the night before. As I walked, I considered my situation, and it wasn’t good. Mac was right. I had screwed up. I was in trouble. I was going to go to trial, and since I was considered a threat to the security of the country, I would probably lose my license and my livelihood.

I had a lot on my mind, but my head was too fuzzy to think clearly. What I needed now was a shower, coffee, and breakfast, pretty much in that order. I’d sort out the rest later.