A Life in Progress: About the Cover 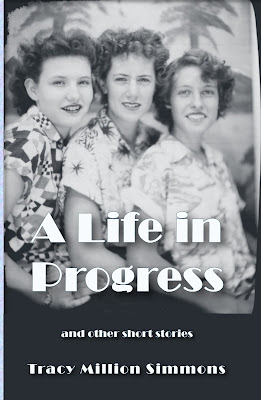 It has been pointed out a few times now that there is no photo credit for the cover image of A Life in Progress, the collection of short stories (fiction) by Tracy Million Simmons. Following is a note from the author about the selection of the photo.

I think I've had this photo in mind for the cover of a book since I first discovered it in my mother's photo album when I was just a kid. It was taken at the Kansas State Fair in Hutchinson in 1952. My mother (on the right) was 16 years old at the time. This would have been around the time she met my dad. They were in 4-H together, though I gather from my mother's journals that she grew much more interested in 4-H after she met my dad. They both showed steers in 4-H and my mom also writes a lot about sewing.

The girl in the middle of the photo is was my mom's neighbor and one of her best friends, Patti Culver. She plays a special role in my life today, as well. My kids know her as Grandma Pat as she married my dad after my mother passed away in 1997. She was always my mom's friend and I have memories of her throughout my life. In fact, one of my earliest memories is of riding a little wooden rocking horse at Pat's house. I remember the bell on its nose jingling and the room was full of women's knees. That shows you just how young I must have been, I believe just walking or maybe just starting to walk.

The girl on the left is Bobby (nickname for Barbara) Cecil. I had originally identified this girl as Pat Hammer. My mother's life was full of Pats! And in my mind, I have always identified this photo as my mom and her friends Patti and Patty. However, when I woke up this morning (12/22/2017) it popped into my head that this was not Pat H., but Bobby C. Pat Culver (now Hessman, now married to my dad) told me this when I had asked if she was okay with me using the picture. Yet until this morning, I had returned to the memory of the two Pats.

Though I have no memories of Bobby from my childhood, I do remember my mother telling stories about her and she appears in my mom's diary entries. She was also a neighbor -- all three girls lived on the Fort Dodge Road through Junior High School. I believe Bobby died a year or so before my mom. I will have to look it up in my mom's letters, but I have a memory of her telling me that Bobby had breast cancer (my mom also had breast cancer, but a rare, slow-growing form -- her doctor once called her a survivor of breast cancer) and not long after, telling me that Bobby had passed away. I remember that she was very angry about this. In her mind, she was supposed to be the next to go. I think she had an idea that if she died from cancer, maybe her friends would be spared from a similar end.

My mother was always a story teller and she was an avid scrapbook keeper, so I was raised on tales of her childhood and adventures she had with her friends. Though the stories in A Life in Progress are all fiction, I felt this photo of my mother and her friends suited the cover and the title story, quite well. It captures my mother's spirit and her attitude. It has always been one of my favorite photos and I think it looks beautiful on the cover of the book.

It's funny how thinking about this photo has dug up new memories and new stories to be told. I think I could write a book with the same title that was filled with true stories of my mom and her friendships, both lives gone and lives still in progress.