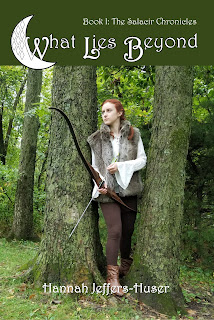 What Lies Beyond, by Hannah Jeffers-Huser

Salacir had no need of a Peace Bringer for more than a century, yet two babies were born with the diamond-shaped birthmark of the prophecy on the same day. One the spoiled prince of a high king, the other a studious daughter of a warrior tribe—would they prove the old seer correct?

“A fascinating plot that turns and twists in ways I could not predict, Book I in The Salacir Chronicles: What Lies Beyond, Hannah Jeffers-Huser’s first novel, is a fast paced fantasy that has it all: action, romance, and mystery! Looking forward to Book II.”
~ Brenda Sanchez--Associate Professor of English, Independence Community College

“Hannah Jeffers-Huser cements characters in a world crafted with care and intricacy. She creates a world that feels active and lived in. The characters each feel utilized, presenting their own philosophies and ideals, rather than simply presented as narrative tools. The story itself is spry and engaging, something that will keep young readers turning the pages. Her writing contains a flavor that reflects much of her personality and wit, encompassed in a fantasy realm. The Peace Bringers’ unique personalities and attitudes highlight upon the pages from the moment they’re introduced. The first book in what is bound to be an extraordinary series, The Salacir Chronicles, finds its place as a wondrous adventure full of unending events.”


The Story Behind What Lies Beyond