A Time for Tears, by Jerilynn Jones Henrikson

A Time for Tears, by Jerilynn Jones Henrikson

World War II contains millions of stories, for it affected millions of lives. A Time for Tears examines three—André from Soissons, France; Daniel from Topeka, Kansas; and Rachel from Paris—caught in a tangle of events and emotions.

André Jabot, a teenage French aristocrat, is enraged by the killing of his young brother as the Nazis blitz the nearby village of Soissons. He swears vengeance and finds his way to England to join De Gaulle and the Resistance.

Daniel Hagelman, a young Jewish grocer from Kansas, cannot turn his back on the horror of Hitler’s Nazis and travels to England to volunteer in the Royal Air Force, leaving behind a wife and newborn baby girl.

Fifteen-year-old Rachel Ropfogel’s parents, upper class Parisian Jews, see the oncoming disaster as France falls to the Nazis. They arrange sanctuary for their daughter in the remote village of Le Chambon-sur-Lignon where she assumes a new identity, Simon Bouret, a twenty-year-old art teacher.

Each of these characters become members of the French Resistance and find themselves pursued by the relentless SS officer, Fredrik Haught.

Murder, torture, chaos, orphaned children, caged babies, starving captives: cyanide tablets become a reasonable alternative. In war, many die, some survive. War ends, but only if survivors remember and teach future generations what they have learned, only if they remember A Time for Tears. 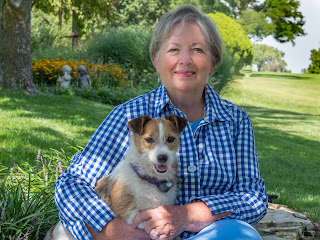 Jerilynn Jones Henrikson has lived her life loving the rolling Flint Hills of East Central Kansas. The far horizons, changing seasons, and fascinating wildlife of this expanse of prairie have inspired her stories and defined her sensibilities. Most of her writings are designed to appeal to the very young with clever rhymes and engaging situations featuring this place as background. This story is a departure. Listening to her father’s experiences and remembering his return from WWII raised questions that, with time, grew into a demanding desire for answers. What was the impact of this War on children her own age who found themselves in the middle of conflict? When she began to feel parallels developing in our current political world echoing the situations that brought about that war 75 years ago in Europe, she felt compelled to write this story. The book, a result of research, memories, and imagination, is designed to inform Young Adult readers of today about this terrible Time for Tears.

"Opportune describes the publication of A Time for Tears by Jerilynn Jones Henrikson. Now more than ever, we, as a society, can recognize “man’s inhumanity to man” and make conscious decisions to avoid duplicating history. If you respect those who have courage and are willing to make sacrifices for the benefit of others, you will appreciate this historical WWII fictional account of children and adult Jews in France who faced extreme conditions."