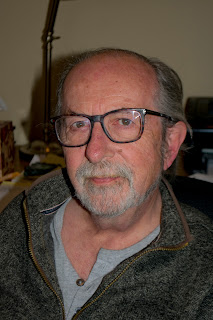 I got the sad news last evening that Meadowlark author, Mike Hartnett, has passed away.

Mike Hartnett was a retired high school English/Speech teacher and business journalist (magazine columnist and editor and newsletter publisher), winning awards from the American Society of Business Press Editors. He led a memoir-writing group for the Douglas County Senior Citizen Center and was a co-leader of a men’s writing group at the Douglas County Jail.

Mike was the co-author of a play, Worthy of the Name, which was presented at Chicago’s Cultural Affairs Center, and a collaborator of a readers’ theater production, Prose & Cons, Voices From Behind Bars. He was the author of a memoir, And I Cried, Too: Confronting Evil in a Small Town (Meadowlark, 2019).

When I first received Mike's manuscript, it had been more than 40 years in the making. I met a kind and thoughtful man who obviously still carried the weight of the events from his years at Lincoln College. We talked extensively about his desire to publish his book, and his decision to publish it now, finally, in 2019. Almost as soon as he had signed his publishing contract, Mike's wife Barbara was diagnosed with cancer. The pleasure of seeing his book come to life was mixed with the pain of sharing his final years with the love of his life. All our plans for a book launch and book tours were set aside, though the book has done exceptionally well despite all of life's distractions. Barbara passed away in the spring of 2021.

Through Mike, I met the poet Antonio Sanchez-Day (now deceased), and became better acquainted with Brian Daldorph, both of whom became/will become Meadowlark authors. Mike will forever be considered a cornerstone author of Meadowlark Press. He took a chance on me when I was still relatively small and less experienced. His book solidified Meadowlark as a Midwest press, and much enlarged our audience of readers.

In our most recent email exchange a few weeks ago, I shared my delight at the success his book was achieving in ebook format. He replied immediately that he was "doing ok" and shared future events where we might have an opportunity to visit in person. I am very sorry to miss those visits.

Time is often so much shorter than we imagine it will be.