Wednesday Excerpt: What Lies Beyond, by Hannah Jeffers Huser

Today we celebrate the birthday of Meadowlark author, Hannah Jeffers-Huser. As a treat, here's an excerpt from What Lies Beyond, available in the Meadowlark bookstore. 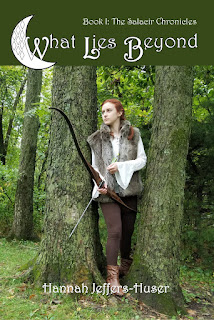 Halona gave the tall, redheaded young man who stood in the doorway of the village medical hut a scolding look. His left arm was bleeding. He rubbed the back of his head sheepishly with his good arm as they stared at each other with matching green eyes.

“Evian.” The name rolled from her tongue, causing her older brother to cringe. She motioned for him to sit on the cot beside her. He obeyed the small woman’s orders and flinched when he saw her furious glare up close. She searched around in the cabinets of the hut before walking to her brother with a basket of supplies in her pale hands.

“You and Severin were training again.” It was a statement, not a question. The harsh tone of her voice made Evian cringe once more.

He let out a nervous chuckle before speaking. “Yeah. We got a little carried away. You should see what he looks like.”

“I’m assuming he doesn’t have a single scratch. You can’t beat him, Evian. He’s a strong fighter.” She gave her brother a teasing smirk as she began mixing herbs into a bowl to create a brown paste.

Evian sighed dejectedly before asking, “Where’s Mariana?” He looked around the hut. The clan’s healer was always in the medical hut. She rarely left her apprentice there alone.

“Father wanted to see her.” Halona began to spread the paste onto the slice in her brother’s arm. “You need to be more careful. This cut is deeper than the last one.”

Evian hissed as the paste left a burning sensation in his flesh. He laughed to hide his pain from his sister. “I was only sparring with Severin. It’s not like he would intentionally kill me.”

Halona shot her brother a serious look. “He could if he wanted too. You’re lucky he’s more level-headed than the rest of us.”

Evian hissed as the burning sensation grew. Halona slowly began applying bandages over the paste as it glowed a pale shade of green.

“Why does healing magic hurt so much?” Evian frowned once the burning ended.

“Because you are a wimp,” Halona teased. “You’re all set. Try to be more careful next time. I didn’t use a lot of magic; it will need more time to heal. Don’t go getting sliced up by Severin again.”

“It’s not my fault the man is always training,” Evian groaned. “He needs to loosen up. He’s just like Pops.”

Halona rolled her eyes as she began putting the supplies away. Evian stood to help her put everything back where it belonged. He pulled the bloody sheets from the cot and tossed them into a basket of dirty laundry in the corner.

“How is it having the whole medical hut to yourself? You feel like a real healer yet?” He smiled in Halona’s direction.

She frowned and put her hands on her hips. “For your information, I am a real healer!”

Evian held his hands up in defense to protect himself from the tiny girl’s wrath. “I didn’t mean to offend you! I was just wondering since you’re still Mariana’s apprentice.”

Halona sighed as she put fresh sheets onto the cot. “Sorry, I’ve just been on edge since I had that meeting with Seyu the other day.”

Evian nodded. “That’s right. Seyu and his prophecy talk. It’s a bunch of hoo-ha.” He waved his hands in the air dramatically.

Halona punched him in his good arm, “Shut up, Moron. I believe in it. I’m supposed to meet the other Peace Bringer soon.”

“Our clan is already at peace. The Avory haven’t had an incident with Aria in years. You can’t bring peace when it already exists.”

Halona rolled her eyes again. Her brother would never learn. He might not believe in the Prophecy foretold by her destiny mark, and that was fine. She believed. Just as their mother had believed.

Once the sheets were on the cot, she began to complete the list of tasks that Mariana had given her before she left. Most of them were simple cleaning or organizing tasks. Others were practicing on healing and magic control. One task was to remember to eat. Halona was always getting so engrossed in her duties that she forgot to feed herself. And a given, of course, was to heal any injury that Evian came in with.

Halona chuckled as she went to retrieve her lunch from the back room. She inhaled a small sandwich made of tomato and a slice of lamb before crossing eating and healing Evian off the list. She decided the cleaning tasks would be next because the sun had not set yet.

The healer, Mariana, returned just as Halona was starting on the windows. Mariana was much older than Halona. Her blonde hair was aged gray. She was the Avory clan’s best and only healer. She had taken Halona under her wing years before as a promise to the girl’s mother.

“Welcome back.” Halona smiled at the woman.

Mariana returned the smile. “How was your afternoon, Princess?”

Halona’s eyes rolled at Mariana’s respectfulness. “How many times do I have to tell you not to call me that? Mariana, you’re my teacher.”

Mariana gave the girl a devious smirk. “I am aware. I do it because you hate it.”

Mariana laughed and finished helping the girl with her tasks. Evian tried to help, but Mariana kept shooing him out of her way with the excuse that it was healer’s work. She wanted to keep him from touching anything after the broken vial of potion he had been responsible for the week before. Evian patiently sat on a cot and waited for his sister to finish her duties for the day.

“Are you almost done yet?” Evian occasionally whined just to get on Halona’s nerves. She threw something at him every time he complained. Mariana laughed at the siblings’ banter. She had helped their mother, Elexia, birth each of her four children. A sad smile crossed Mariana’s face as she watched the two youngest children of her best friend.

“You two are so much like your mother,” she said with a quiet laugh. The duo paused their bickering to smile and laugh at Mariana. They were always being told that they were spitting images of their late mother, and they felt honored that she was remembered so fondly.

It did not take long for the duo to finish cleaning the hut. Evian slumped against the far wall and dramatically sighed.

“That was tiring,” he panted.

Halona smacked him upside the head with a laugh, “You barely did anything, Stupid.”

Evian rubbed the back of his head as Mariana began ushering them out the door. “You two go home. It’s late. I’m sure your father is expecting you. His council meeting should be over soon.”

The siblings opened their mouths to retort, but before they could say anything, Mariana shut the door in their faces. Evian laughed and commented on the older woman’s impatience. Halona did not respond. She stood next to her brother, staring off into the distance.

Evian waved his hand in front of her face to get her attention. She did not budge, so he grabbed her by the shoulders and shook her.

She snapped out of her trance and shook her head. She gave Evian an apologetic smile before pointing toward the forest in the direction she had been staring.

“I saw a few men go that way with weapons. We just went hunting. No one is allowed to go out on their own.” She started walking in the direction she had pointed. Evian called after her, telling her that she was probably just crazy, but Halona knew what she saw. She knew the rules of the village, but her curious nature was getting the better of her.

Evian groaned before grabbing her arm to stop her, “If you’re going to follow, we need to take our own weapons. It could be dangerous.”

She looked toward the forest and then nodded to her brother. They could sneak back into their house to retrieve their own weapons without their father knowing. The weekly council meeting was still in session.

Email ThisBlogThis!Share to TwitterShare to FacebookShare to Pinterest
Labels: Free Sample, Hannah Jeffers-Huser, What Lies Beyond