Excerpt: Echoes in the Hallways: History and Recollections of 102 Closed Iowa High Schools, by James Kenyon 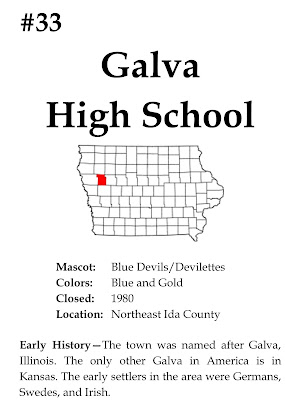 Buses—The first buses used were called hacks. They were wooden coaches pulled by horses. Soap stones heated at the school furnace were placed in the buses during the winter to help keep the children warm. In 1932, the first motorized buses designed by Jim Fleetwood (’32) were used to transport the students.

By 1954, the Galva Community School District had expanded to 72 sections of land and used seven 24-passenger buses. The drivers each owned their buses and the district paid them mileage.

Music—In 1932, there was a school orchestra with 14 students.

A picture of the 1939 Girls Glee Club showed 24 girls dressed in identical dresses. These dresses had been purchased from Younkers in Sioux City for $1.50 each.

In 1962, a new band and music instructor came to Galva. Mr. Jim Inman led the band and music department for the next 18 years, until the high school closed. The school purchased new band uniforms in 1965. The dark blue and gold uniforms with Galva printed diagonally across them became known throughout the state. They were even seen in Winnipeg, Canada, as the entire marching band traveled across the border to perform at the Winnipeg Band Festival and Parade.  Between 90 to 95% of the student body was involved in some performance position including twirlers, flags, majorettes, and instrumentalists. Galva set an Iowa State record in Small Group (Class) contests with 50 Division #1s in instrument solos and ensembles.

Sports—Football was played for the first time in 1906. For the next three years all the team’s games had to be played away as Galva had no field. The teams they played were Ida Grove, Correctionville, and Early.

Boys basketball became a school sport in 1912. All the practices were outside on a dirt court as the school had no indoor practice facility. The team’s first game was at Holstein which sported the indoor Turner Hall. The Holstein team was dressed in uniforms, but Galva only had cut-off overalls. With the indoor surroundings and the awe of the uniforms, Galva lost the game handily.

Events and Activities—With the outbreak of World War I, the students were involved in rolling bandages for the Red Cross.

In 1942, the grading system was changed to drop the letter grade E, between D and F.

Kindergarten was started on March 6, 1944 on a part-time basis due to the large class that was anticipated for the first grade the next fall. Kindergarten became all day in 1950.

An honor roll was prepared by the high school students to commemorate and recognize the 105 Galva graduates that were serving in World War II.

The first school annual yearbook was printed in 1953 and called the Galvacade (named based on the popular radio show called Cavalacade of America).

On November 22, 1963, Kathy Wanberg Breyfogle (’67) was going to home economics class when she passed by the superintendent’s office and heard that President Kennedy had been shot. “I hurried into the home economics room and announced that the President had been shot. At first, nobody wanted to believe this freshman, but with my horrified look it finally set in,” she remembered.

Kenyon was a veterinarian for 35 years in a mixed animal practice in Iowa and a seven-time veterinarian for the Alaska Iditarod Dog Sled Race. He also served for twenty-four years on his local school board. He is the author of, A Cow for College and Other Stories of 1950s Farm Life and Golden Rule Days: History and Recollections of 109 Closed Kansas High Schools. Both books received commendations as Martin Kansas History Book Award winners.

Praise for Echoes in the Hallways:

“Echoes in the Hallway is a time machine for those who love Iowa history, or those who simply enjoy remembering the days of long ago. No matter where in the lengthy book you drop in for a visit, the pages contain sweet, funny, or memorable tales of long-ago schools and school days. And even better for those who take pride in the Hawkeye state are the stories told by the classmates or neighbors of the famous, notable, and just plain interesting folk who attended and thrived in the small schools that dotted the plains of the state before consolidation had even been heard of.

“Although not a native Iowan himself, author James Kenyon shows a real appreciation for his adopted state, writing of the history of the small towns whose schools are no more. And while there are many topics he includes in each of the renderings of 102 ghost high schools of Iowa, he treats with the special fondness of a native the stories of six on six girls basketball and what it meant to the tiny schools that were Goliath slayers in the annual state tournament. He let the local historians sitting around the kitchen tables, in the libraries, in the parks and the history centers tell him and his readers their stories in their own words and their love and pride of their no-more schools comes through in the words he captured.

“In all, Dr. Kenyon met with hundreds of Iowans recording memories of 102 high schools—one for each county and then three extra—that are no more. Through his vignettes, those stories of those forgotten schools have been saved forever. As a graduate of one of those schools, I thank you, Jim.”

“Dr. Jim Kenyon’s Echoes in the Hallways gives an in-depth look at early education in Iowa.  By focusing on one high school that has closed in each county, he paints a vivid picture of secondary education across the state.  Hearing the voices of those who attended each school adds wonderful, intriguing memories that come alive in a way that only can be told by individuals who were there.

“High schools have long made up the social fabric in communities across the state, especially in rural Iowa.  By engaging with community members in the 102 schools cited in the book, Dr. Kenyon reveals the extreme pride people of Iowa have in their schools and communities.  Echoes in the Hallways showcases how Iowans have built an extraordinary education system school by school.  Because it is so well researched and written, once you pick it up you’ll have a hard time putting it down.”

“K-12 education has an extremely rich history in Iowa.  As a result, nearly every community, large and small, had a high school, and it was a source of pride and joy for its residents.  Often, the school and its activities defined the community’s history. However, as the rural landscape changed over the years, resulting in fewer farm families, many of the smaller schools declined in enrollment.  Much to the dismay of these communities, the school districts either reorganized with larger districts or closed its buildings altogether.  A rather large number of communities were left with empty school buildings.

“Author James Kenyon captures the history of 102 of these closed Iowa high schools in his most interesting book, Echoes in the Hallways.  Through interviewing people within the community who were invested in the school’s history, researching noteworthy events in the town, honoring students, teachers and staff who impacted the school, and, finally, noting the school’s final closing days, the school’s history was fittingly recorded. I thoroughly enjoyed Echoes in the Hallways and appreciate the efforts to preserve some of the history of Iowa’s schools. ”