Excerpt from Shadow of Death, by Michael D. Graves

Shadow of Death is the second title in the Pete Stone, Private Investigator series, published December 2017. 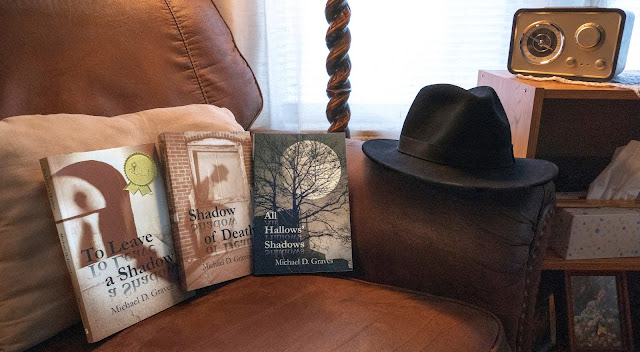 The first time I met the cop we had words. You might’ve called it an altercation. Maybe even a fight. It was night, late at night, going into the wee hours of the morning, and I’d been drinking, again. I’d been drinking a lot lately. The cop braced me on the sidewalk down the street from Tom’s Inn, planting a fleshy paw on my chest with a stiff arm. He flashed a grin that bore not a trace of good humor. He leaned in and sniffed my breath and snapped his head back.

“Ugh, man. You smell like a drunken bum. You’re stink-o, you are. Who are you, buddy? What’s your name?”

I fumbled through my pockets and pulled out a card.

“Pete Stone, Private Investigations,” he said. “So, you’re a gumshoe. Well, you’re drunk, gumshoe. I hope you don’t think you’re going to drive your fancy automobile over my city streets in your condition. Cause if you do, you’ve got another think coming.”

“Wise deduction, Sherlock,” I said. I may have slurred. “How’d you figure that?”

Tom and I had spent the better part of the evening perched on barstools, swapping stories and lies, and lowering the level of a bottle of rye whiskey. We’d discussed our lives, what we’d done, what we hadn’t done, what we wished we hadn’t done. We’d bounced around the country’s problems and agreed the solution to halting the current Depression was to boot out the politicians and replace them each year with whichever team won the World Series. We’d proclaimed that the humblest barbeque in Jerkwater, Kansas tasted better than the finest steak in Delmonico’s Restaurant, never mind that neither of us had

ever eaten a steak at Delmonico’s or any other fine restaurant in New York City. And we’d pondered why the women we loved always broke our hearts and we kept coming back for more. It was the pondering over one woman in particular that had led me to the bottle, the barstool, and to bending the ear of my longtime pal and confidant, Tom, owner of the inn bearing his name.

Now it was late, the whiskey was gone, the inn was closed, and I was on the sidewalk, weaving on wobbly pins in front of a beat cop. I was filled to the gills with wisdom, wit, and bullet-proof courage. The cop was unimpressed.

“Okay, wise guy. Give me the keys. You’re not driving anywhere.”

That seemed an unreasonable request. Then again, I was in no condition to be reasonable. I puffed out my chest like an idiot and said something stupid that besmirched the cop’s parentage. His eyes grew wide, and a vein bulged on his neck. His hand went for his nightstick. My arms went up, and I heard, or felt, an explosion. For an instant, it was all rockets and a light show blazing in my skull, then the lights dimmed and faded into darkness. Later, I would swear that’s all I could remember. After that, however, I would be consumed with doubt.

The next time I saw the cop he lay in the morgue, stretched out on a slab. My hands were cuffed, my head throbbed, and my vision was blurry, but I could make out the third eye in the cop’s forehead, the one the bullet had put there. My aching ribs made each breath an exercise in pain, and hammers clanged in my skull, but I could process a thought. I had heard the voice, I had listened to the charges, and I knew where I stood. A cop lay dead, murdered. I was found lying next to him, out cold but breathing. My .38 Smith & Wesson, with a spent cartridge, lay on the sidewalk next to me. How and why my gun came to be there was a mystery to me. I couldn’t explain it. I had no memory of pulling the trigger. No one else was around, but someone had seen or heard something. Someone had made the call. I was arrested, cuffed, and tossed into jail. Maybe the arresting officers had jumped to conclusions. Maybe they hadn’t. I was in no condition to argue. I was in deep trouble, and I knew it. I was booked on a murder charge. I was booked as the sole suspect in the murder of one of Wichita’s finest. I was accused of killing a cop.

Michael D. Graves created the character of Pete Stone as a memorial to his grandfather. His first Pete Stone novel, To Leave a Shadow, was selected as a 2016 Kansas Notable Book. All Hallows’ Shadows is his third Pete Stone novel. Mike’s writing has appeared in Cheap Detective Stories, Thorny Locust, Flint Hills Review, and elsewhere. He is an author of Green Bike, a group novel, along with Kevin Rabas and Tracy Million Simmons. He lives with his wife in Emporia, Kansas. They are both members of the Kansas Authors Club. When life conjures its riddles, Mike turns to back roads and baseball for answers.