Honoring our Veterans with an Excerpt from Headwinds, by Edna Bell-Pearson

The Air Base (Liberal, Kansas)

When we started hearing rumors that the government might build an air base near Liberal, it sounded pretty far-fetched. I ran into George Davis at the post office one morning and asked him what he knew about it. George had been mayor three times and usually knew what was going on.

“No more’n you do, I reckon,” he said. “Seems to me that this is a logical location for one though. We sure as hell got room for it.”

The implications were so great, folks spent a lot of time mulling that one over. Not many of the townsfolk had even been up in one of Bonnie’s Piper J-3 Cubs.

When the newspaper reported that the government actually was going to build a base near Liberal, we figured it would probably change things some. Hopefully, it would bring a little more money into the area.

No one dreamed just how much it would change us and our town.

Once the decision was made, the government didn’t waste any time. Within weeks, we were standing on the corner of Main and Second Street watching cars, trucks, and construction equipment rumbling in from every direction—all headed for the west edge of town.

What with the magnitude of the prairie surrounding us, we’d always considered ourselves sort of isolated out here. Now it appeared that a broad ocean and a half continent between us and the enemy—both east and west—no longer safeguarded us from the far-reaching tentacles of war.

Construction of the airbase began on January 9, 1943. In the weeks that followed, our lives were virtually turned upside down and inside out. Everything happened so fast we were overwhelmed, but we somehow managed to cope as hundreds of construction workers and their families poured into town.

The wide streets we’d always been so proud of were soon congested with trucks and automobiles. Hotels, motels, and apartments filled up overnight, and folks began renting out spare rooms and converting garages, basements, and attics into sleeping rooms and apartments. When they were full, people began spilling over into nearby towns.

The Office of Price Administration opened a new office to supply ration cards for meat and sugar, gas, and shoes. Everyone who was able-bodied went to work to help fill the needs of this sudden influx of people who demanded, not only food, but clothing, toilet articles, cigarettes, and beer. Everyone seemed in a rush, and wherever lines formed—at restaurants, stores, and theaters—people joked about “waiting to hurry up.”

Impatient construction workers, in khakis and jeans, overalls and denim shirts, crowded into restaurants for breakfast each morning before dawn. While they ate, waitresses rushed around, filling their battered lunch pails with sandwiches, pie, and coffee. When the workday ended, they returned for dinner. At night, beer flowed freely in taverns, and music and laughter echoed from smoke-filled “private” dining clubs, so-called to circumvent Kansas’s prohibition laws.

Liberal was no longer a struggling, depression-scarred, dust-bowl town. As we watched it grow and expand, we were proud to be a part of it; proud to be doing something besides raise grain to help win the war. As money passed from hand to hand, it was more than most of us had seen in a lifetime.

Meanwhile, west of town, long-legged jackrabbits and wary coyotes loped off across the prairie as their natural habitat was destroyed by monstrous construction equipment. Almost overnight, land that once produced corn and wheat, prairie grass and tumbleweeds was transformed into runways of solid cement.

Then, around it all, they built a high steel fence.

Gigantic steel hangars and row upon row of long, narrow barracks, mess halls, and office buildings appeared as if by magic on the once-barren landscape. Five months after construction began, crews and equipment moved on and hundreds of young soldiers, some children only yesterday, arrived to take charge and assume the roles necessary to take care of the needs of the expected student pilots.

On June 20, the huge, hulking B-24 Liberators1 began arriving, and on July 1, the first class was introduced to the bomber.

Overnight, it seemed, young soldiers poured in to fill the roles of pilots and co-pilots, navigators, tail-gunners, bombardiers, maintenance crew, and operating personnel. Each training cycle covered a period of nine weeks. A new class began halfway through the cycle, so that a class graduated every four and a half months.

In the coming months, the skies over the Great Plains roared and groaned and shrieked as the four-engine instruments of peace and destruction thundered in to lay claim to the concrete manifestation.

As the Air Force song echoed from taverns and barracks and from automobiles congesting the streets, “Off we go into the wild blue yonder” became more familiar to us than “Home, home on the range.”

The war, which had been a distant two-headed monster we read about in newspapers and letters from loved ones just months ago, had come to Liberal, bringing with it the regimentation, the excitement, the insidious fear—and the prosperity it engendered.

As we became accustomed to bombers rumbling overhead, echoing across the prairie, we learned to determine by sound if it was one or three or a squadron. We also learned the difference between the thrumming sound of the B-17 and the lumbering sound of the B-24—the Liberator—and, later, the roar of the B-29 which would ultimately bear the instrument of destruction and free our country from war. With the passing of time, we lost interest in rushing outside, our eyes upward, gazing in awe at their presence.

We no longer had time to stand around at the post office, or on street corners, exchanging small talk about “how the war was going.” We knew first hand because we were a part of it. It monopolized our thoughts and our dreams. All our activities—everything we did—was planned around “The War.”

1 The B-24 Liberator, a four-engine heavy bomber designed by Consolidated Aircraft of San Diego, California, was used extensively in World War II. It served in every branch of the American armed forces, as well as several Allied air forces and navies in every theater of operations. Over 19,000 units were manufactured, over 8,000 by Ford Motor Company in the “Long Hangar” a Willow Run, Michigan assembly plant. The world’s largest building, it turned out a plane every 55 minutes. The B-24 holds records as the world’s most produced bomber, heavy bomber, multi engine aircraft, and American military aircraft in history. 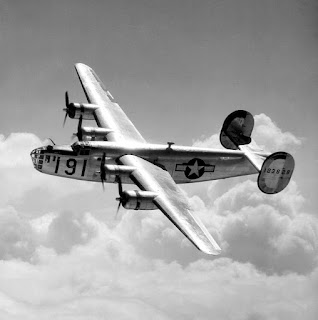 Learn more about Headwinds, A Memoir (a 2020 Kansas Notable Book).