The Meadowlark Reader: 3-2-1, an excerpt from A Cow for College, by James Kenyon

Each Wednesday we will share an excerpt from a Meadowlark book. Sign up at Feed Burner to receive Meadowlark updates by email. 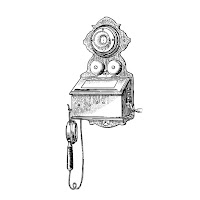 "Two, three, one, Please . . . Hello, is Barbara there?” This was the ritual with my brother. Claudie was smitten with his fifth-grade sweetheart. He never looked at another girl or thought of any other love in his life. Since he was thirteen years older than me, there was not much playtime or brotherly interaction. The telephone was his lifeline to reach the object of his infatuation who lived in the county seat town nine miles away. I heard Barbara’s phone number over and over each day from the time I was old enough to walk.
Our family had a crank phone on the wall in a stained oak box. We were on a party line. The caller would pick up the receiver which was on the end of a cord attached to a Y-shaped hook on the side of the telephone box. The caller held the receiver to his ear to listen if one of the other seven neighbors was using the line before cranking the small metal handle on the right side of the phone box to get the operator. The bell at the top rang and an operator answered and said, “Number, Please.” It was not important to know from where and who this operator was, but she somehow took our line and plugged it into a circuit bank opening to the sprocket of the number we were calling. When this connection and electrical current were completed, that person’s phone rang in their home. Since we were in such a rural area, the party line
(multiple homes on the same circuit) was normal operating procedure. We could call others on our circuit by knowing their phone number and rotating the lever to the proper long and short bell sound. Our number was two long rings and two short rings, 2 –2 –0 –4, commonly called two longs and two shorts. When the bell vibrated two long rings followed by two short rings, we knew to pick up the receiver to answer, speaking into the horizontal circular mouth piece that looked like a duck’s beak. Others on our party line may have been a long and two short rings. Or two shorts and a long. Or even four short rings. When making a call out or when receiving a call, any of the other seven on the party line could pick up the receiver and listen to your conversation. Holding one hand over the horizontal mouthpiece mostly muffled any noise that was caused by listening in on someone else’s conversation. We called those who listened in busy bodies. It was often said, “I can’t tell you this because someone may be listening in.” This comment alone might cause a clicking noise as the snoopy neighbor hung up their phone receiver. “They may still be listening in, so I can’t tell you this yet, so I’ll have to talk with you in person,” was another reply that was heard often.

My brother’s calls to Barbie were never a concern to him. He could have cared less if anyone was listening in on their love talks. “Do you love me?” “I love you. I love you! I love you! Smack. Smack!” More kissing and smooching noises, then a pause and nothing for thirty seconds. Then more smooching and a deep breathing as if resuscitation was taking place. “I’m not going to say anything until you do.” This was followed by several minutes of breathing into the phone receiver, saying nothing. This really had to frustrate a busy body listening in on the conversation or anyone who needed to make a call out while those lovebirds tied up the line.
Sending Claude out to drive the tractor in the field was a futile effort. After he made a few rounds in the field with a plow or cultivator, he had to stop, come to the house and call 2 –3 –1.
My brother’s love, Barbara, was a precious princess. She would never reach five-foot-tall, and she weighed about ninety pounds. She was smart as a whip, and her loving smile and beautiful face made me wish that I was old enough to have her for my girlfriend, too.
Barb and Claude. Claudie and Barbie. Their names seemed synonymous. You didn’t hear one without the other. They went to college together at the University of Kansas. After their freshman year, they were married, both still eighteen years old. They seemed so grown up to me as a six-year-old ring bearer, holding up my end of the ceremony with a white satin ring pad for the wedding photos.
My dad was responsible for providing a car and some affordable means of housing for the newlyweds. He bought them a mobile home, which to me was a playhouse on wheels. Each fall he hitched up the pickup truck to the eight-foot-by-thirty-eight-foot blue mobile home and towed it the 270 miles of two-lane roads to Lawrence in eastern Kansas. In the spring, when the semester was done, Dad went back to the university in the pickup, jacked and hooked up the trailer, and pulled it back to the farm for the summer. A four-foot-deep hole would be dug for a waste cesspool, and the newlyweds were nuzzled in for the summer.
Claude was never destined to be a farmer. He had asthma and hay fever. If he wasn’t coughing and sneezing, he was blowing mucous. (We were never allowed to say the gross word, “snot.”) The wheat dust at harvest time set off two weeks of coughing, snorting, and misery for him. The alfalfa hay bales accentuated his problem. The hay dust wasn’t much better for his asthma, so he was often relegated to less dusty jobs. His true love was in the little blue trailer, and he didn’t need anything else.
The privacy of the newlyweds in the trailer was great, but they had to live with some of the more unusual noises that accompanied this setting. Our goofy dog, Jack, had an unusually long white tail. He crawled under the trailer at night because it was a cool, safe place to lie down. His thumping tail up under the bottom of the floor panels brought out a shout from my brother, “Jack, knock it off!” This resulted in silence for a few moments and then the act was repeated. Before long, Jack was tied up on a chain or shut in the cow barn for more peace and quiet at nights.
After living away from home, being brought back to the farm must have been a setback for the couple’s privacy. I was a constant visitor to see Barbara, and she was a wonderful big sister-in-law. She talked to me like an adult and always had an activity to make the day fun. Whether it was drawing, painting, or games, I had her total attention and I was on cloud nine.
After two summers of moving the little house on wheels back and forth to college, it was pulled to Kansas City where Claude attended medical school. It made it back four years later, after medical school graduation, to sit in our backyard for a while longer. During those summers, my nephews—Jon, Chris, and Noel—and I used it as our getaway clubhouse. Sleeping in the trailer on the cool nights of the western Kansas plains was like sleeping under the open sky with a campfire crackling in the night. Dreaming about such a scene was fun, but sleeping inside with a carpet under us and the screens filtering out the mosquitos was even better. For the four young boys on an adventure, distant nighttime howling of coyotes made it seem safer inside. The hoot owl methodically called all night, singing a forlorn solo in a distant tree.
Without the lifeline of the party line and 2 –3 –1, this blue trailer may never have been a reality. The romance, the asthma, and medical school all paved the way for my brother to leave the farm behind for the wonderful suburban life of Kansas City with his childhood sweetheart.

Copyright © 2017 James Kenyon
A Cow for College and Other Stories of 1950s Farm Life
meadowlark-books.com