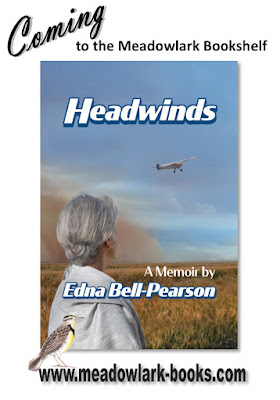 Shipping in August!
Place your order now for the next book on the Meadowlark Bookshelf.

“World War II was in full swing when I did what I considered my patriotic duty and joined the Kansas Civil Air Patrol. We wore crisp, khaki uniforms and jaunty caps, piped in red, and drilled on the athletic field north of the high school before most folks were out of bed in the morning. Not one to do things halfway, I enrolled in a private pilot course and started taking flying lessons in a 1939 bright yellow, 65 horsepower, Piper J-3 Cub.”

This is the opening to Edna Bell-Pearson’s  memoir, Headwinds, a story of one family’s experiences set against the early days of the “Air Age.”

Headwinds takes place over the course of five years, and tells the story of Ungerer Flying Service, a family-owned and operated business stationed in Marysville, Kansas. It covers a time when the United States was becoming the largest aviation manufacturing country in the world, and small planes, designed for flight training and private ownership, with innovations never before dreamed of, rolled off the production lines of Cessna, Taylorcraft, Piper, Beech, and others. The GI Bill of Rights made it possible for veterans to take flight training at government expense. Thousands who had washed out or missed out on flying during the war became pilots. As the business grows and thrives, Edna learns to appreciate the importance of the little things: hunting and fishing trips, being a good housekeeper, and crisp, autumnal days without wind.

This memoir examines the importance of family through hardships, and it will leave you appreciating the value of persistence and determination in the face of adversity. Edna loves her job, and her life, which is an important piece of this inspirational story.

Edna Bell-Pearson’s stories, articles, essays, and poems have appeared in hundreds of magazines, newspapers, literary journals, and anthologies world-wide. She has published six books. She is noted for Fragile Hopes, Transient Dreams and Other Stories, a southwest Kansas saga, chosen during the Kansas sesquicentennial year, as one of “150 Best Kansas Books.”